The 10 Best Golf Courses in the Country

If you’re a keen golfer and appreciate exploring the finer courses, you’re spoiled for choice if you’re willing to travel across the U.S.

A number of the best golf courses in the world are situated right here in the states. Whether you’re looking for challenging holes, breathtaking views, or exclusive clubs, we have it all.

To help you draw up a bucket list of golf courses every serious golfer needs to experience, we’ve put together a list of the 10 best golf courses in the country as voted for by top publications and golf industry experts:

The 10 Best Golf Courses in the Country

You’ll be hard pushed to find a golfing enthusiast who doesn’t think Pine Valley Golf Club is the best golf course in the U.S. Or, at the very least amongst the top 3.

This course holds a long list of awards and has been consistently ranked among the top golf courses in the world for the last 20 or so years.

It was built all the way back in 1919. The only tragedy in the story is that the person who came up with the idea to build Pine Valley, George Crump, didn’t live long enough to see it finished.

What makes Pine Valley Golf Club? A combination of 18 of the most challenging and unique holes surrounded by immaculately maintained grounds, and a very small and exclusive list of members.

If you’re thinking of dropping by, it has a small and exclusive membership list. Non-members can only play if invited and accompanied by a member.

Augusta National Golf Club is host to the annual Masters Tournament, the only major played at the same course each year. It’s a stunning course and comes a close second on the list of the best courses in the country.

Designed by Jones and Alister MacKenzie, Augusta as it’s referred to for short, opened for play in 1932.

It’s known for its impeccable appearance and ambiance. Soothing sounds of birds are played throughout, and every inch of the course is perfectly trimmed and finished.

The course was formerly a plant nursery. As a reminder, each of the 18 holes are named after a shrub, tree, or plant. You’ll see names like Magnolia, Pampas, Holly, and Firethorn as you work your way around the course.

Cypress Point is an 18-hole course best known for its series of thrilling holes that run alongside the Pacific Ocean.

The course first opened its doors in 1928. Much like Augusta and some of the other top golf courses, Cypress Point was designed by famed golf course designer Alister MacKenzie.

It’s a house rule that you need to be accompanied by a caddie. This is to speed up tee times as it’s a much in-demand course.

If you enjoy good weather and stunning views as you play a round (who doesn’t?) Cypress Point should be high on your list of golf courses to visit.

Shinnecock Hills is even been listed on the National Register of Historic Places.

It’s played host to numerous important events over the years and is often ranked among the top courses in the country by golf professionals and industry influencers.

The 18 holes pose some interesting and unique challenges. We won’t spoil any of the surprises for you, but Shinnecock Hills is a must-visit for any golf enthusiast (or some historians).

Oakmont Country Club was established in 1903. It’s an interesting course as it has almost no water hazards and no trees.

What it does have, however, is a lot of bunkers. Some two hundred, in fact. Making Oakmont one of the most feared and challenging courses in the United States, and one of the most difficult in the world.

It’s also known for its steep slopes. Holes 1, 3, 10, and 12 are on inclines, adding the difficulty level. Oakmont certainly isn’t for beginners. But regardless of how well you do, playing on one of the top courses in the U.S. is an experience to remember.

The East Course has been consistently ranked in the top 10 golf courses in the U.S. for years and is never far from conversations about the best and most challenging courses.

It’s hosted five U.S. Opens, with the most recent being in 2013. This speaks volumes about the quality of this course.

Pebble Beach Golf Links dates back to 1919 and is located on the west coast. Within the golfing communities, it’s widely regarded as one of the “most beautiful courses in the world.”

That’s a title to be proud of. It’s easy to see why, too, as it’s nestled alongside the coastline with views of Carmel Bay.

Pebble Beach also has the distinction of being the first public golf course to be voted the #1 course in American by Golf Digest.

With holes running inland, along the Stillwater Cove, on Arrowhead Point, and above Carmel Bay, you’re taken on quite the scenic route while playing the course.

The course was designed by Charles B. Macdonald, who also worked on Shinnecock Hills. He set out to build a course to rival the historic Shinnecock Hills and constructed the National Golf links of America adjacent to it.

Many of the holes are based on famous golf courses in the British Isles, with small adaptations to fit the landscape.

Sand Hills Golf Course has a minimalist design, especially compared to the other courses we’ve featured on this list.

It’s an interesting course. Architects Ben Crenshaw and Bill Coore made use of the landscape more so than turning the landscape into the course they wanted.

It’s said that they moved just 4,000 cubic yards of earth, and let the winds shape the bunkers for the most part. Making Sand Hills one of the most “natural” and least manufactured golf courses in the U.S.

Fishers Island opened in 1926 and offers a unique golfing experience, along with a fun and challenging 18-hole course.

Your journey starts with a short ferry ride over to the island. From there, you tee off with views of the Atlantic Ocean and immaculately maintained sweeping landscapes.

There is a close to perfect blend of water hazards, bunkers, and challenging shots making this one of the best golf courses in the country. It’s also hard not to appreciate the fresh sea air and winds sweeping across from the Atlantic Ocean.

Receive email updates from our team. 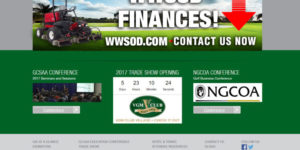